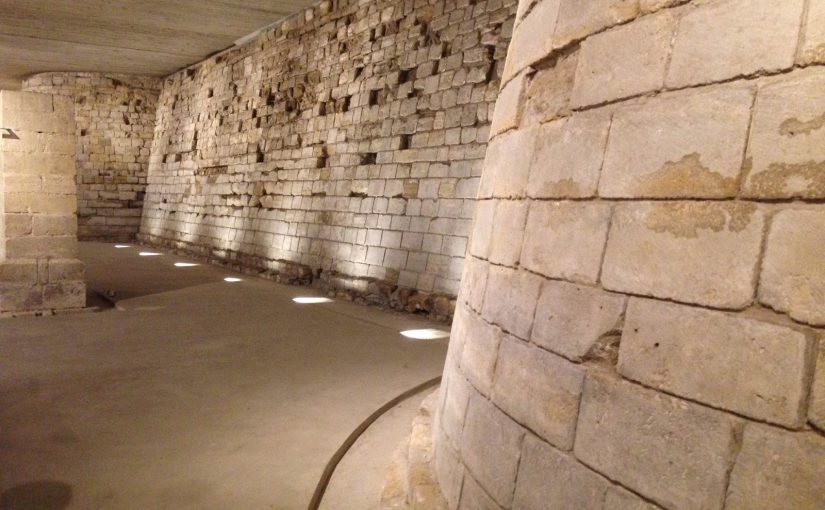 We are late and for once I want to see the basement of the museum so we probably won’t write the way we use to. My guide show me to a room where the foundations of the Middle-Age castle are visible. I barely step in the room that I feel uneasy. Would that be my part-time claustrophobia playing tricks on me ? But the ceiling is at least 10 metres high and the walls are anything but oppressive.

I move forth, trying to understand the strange feeling, intangible and diffuse unease. I force myself to take time to study each informative panel – there even are 3-D plans for the blind – but I concentrate of me sensations. I try to imagine the past, what happened when people really lived here and had no inkling their heirs would one day come gape at art here. Immediately pictures superimpose of masons shoring the foundations and warriors dying but another image soon comes to the front : that of the people safe behind the walls, protected for decades. A peaceful picture. Why then do I still feel threatened ?

I close the distance to a wall, hands ahead, trying to perceive the energy emitted by stones. My palms begin prickling right away and I don’t even dare touch the building such is strong the feeling, even centimetres away. Trembling, I get away quickly, severing the establishing connexion by rubbing my palms together. But now I can feel the energy is all around, not only in the stone itself, it’s pervading the air, filling the moat as water used to. Could it be that the building was enchanted ? That the stones were taught to recognize magic and beware of it ? I shiver, disquiet, I am the enemy here.

My guide has not yet perceived the extent of my unease, he stirs me to a room where more is to be learned about later times but I resist, mumbling vague excuses and dashing to the exit. My discomfort vanish as soon as I step out. I am in a very small room – so it really wasn’t claustrophobia – most of it occupied by a serene sphinx. Beneath the millennia stare of the stone chimera I feel protected. The creature is a keeper of the thresholds, she and I understand each other. We are alike, plural by nature, unknowable. Benevolent, she let me pass and keep her watch over the way.

Driven afar in the Nile’s delta marshes, I forget everything. Time goes by amongst the immortal relics and now guards push us towards the exit. I don’t want to go through there again but they don’t leave me a choice. Aware that my reluctance would be met by flat stares, I take a breath – as if to prepare for deep diving. My companion has noticed my queasiness but how to explain what’s at play here ? Still, silently, he instinctively fulfil his task. He takes my hand and squeeze it. I look at him. I trust him. He won’t let go and will see us through. I close my eyes and take a step. The unhealthy oppression has disappeared. Whatever it is, it’s now fully awake and determined to do me harm. The assault is brutal, immediate. I walk quickly, letting my companion guide my body safely to the other side while I focus on the mental battle. Calling upon my inner forces, I summon the She-Wolf to my side. Creature of the Earth and the Wild Fire, she fears none and never failed me. Still today I invoke her in vain but something else stirs in me. A being I have been aware of for some time but who never showed before. Unexpected, the Wyvern spread her wings and with a silent call of challenge takes flight above me. Her serpentine body of mermaid undulates around us, protecting both me and my guide and her powerful wing flapping fend off the invisible assault. I still don’t know what she’s fighting against but I can feel the relief of pressure. I dare open my eyes and see we’re almost to the exit. My wyvern dashes forth, eager to get out of this hell but as she feels the threats looming over me she turns, stationing herself behind me to protect my retreat.

We are finally out of the moat. I look around, surprised. No trace is left of the furious fight. The wyvern is gone. From the moat, nothing can be felt, as if the door cut sharp any demoniac influence that might reign beyond. I smile, relieved and take my guide in my arms, happy we’re safe. He almost laugh, gently making fun of me. I explain, knowing he doesn’t believe me, he doesn’t judge either. Knowing he’ll take my tale as that of a would-be teller trying to make sense of her irrational fears with imaginative embellishments. Maybe.

Or maybe I perceived the last remnants of an old magic, of times when the king was thaumaturge and had to protect himself from enemy magicians. Or why would this guide of mine acknowledge, when I end my story, that my She-Wolf and Wyvern had his lover’s Sphinx and his own Salamander for companions ?

Written at Le Louvre, with ❤️Saba and a few unseen beings 👻

2 thoughts on “Rise of the Wyvern”